The affiliate unions of the BC Building Trades, including IBEW 213, raised $622,500 for the province’s flood relief efforts.

“Within days of the flooding, local building trades unions were putting the call out across their organizations for donations,” said BCBT executive director Brynn Bourke. “This disaster touched everyone from members who were displaced by the flooding to members engaging in the rebuilding effort. We wanted to do everything we could to support people and communities during this difficult time.”

Donations to the Canadian Red Cross are coming from the BC Building Trades Council, its local affiliated unions, national unions, and sister locals across North America. The donations are matched by the provincial and federal governments for three times the impact: more than $1.8 million.

“The Red Cross is in the best position to provide direct financial support to people impacted by the flooding,” said BCBT president Al Phillips.

A necessary part of the flood response is also to repair the devastation to the province’s vital infrastructure, including roads and other structures. Building Trades members were part of the first teams on site repairing infrastructure. 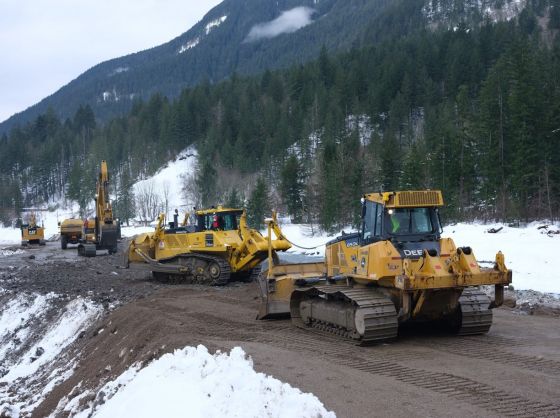 January 10, work to repair washed out roadway at Othello east of Hope, B.C. Photo by BC Building Trades.

“Our members have already been working exhaustively to repair the damage caused by the flooding and we will continue working until it’s complete,” said Phillips. “This is what we’re trained for and this is what we do.”