Long Awaited Win for Workers at the Federal Labour Board

After over five years fighting for a first collective agreement that includes over three years on the picket line, IBEW 213’s long-awaited Section 80 application to the Canadian Industrial Relations Board (CIRB) finally arrived. 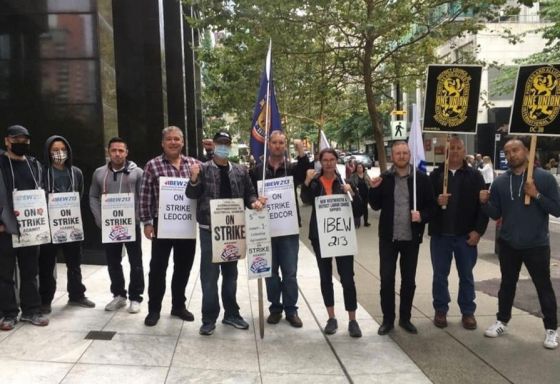 “This CIRB decision validates our belief that Ledcor wasn’t interested in bargaining a collective agreement,” said IBEW 213 Assistant Business Manager Robin Nedila, “The members employed by Ledcor chose to join the IBEW in 2017 in hopes of a better future and a real chance to bargain for better working conditions.”

The Board’s decision follows a 2021 ruling that found Ledcor had violated the Canada Labour Code when they lied to a large part of their workforce, telling them that they weren’t actually IBEW 213 members.

Having the members divided by lies and deceit, and their unfettered use of scab labour in the face of picket lines, created an unfair advantage for the company in bargaining.

IBEW 213 applied to the Minister to have the CIRB intervene at the end of 2019. Finally, a decision.

It’s been a long road to this Section 80 decision – a global pandemic, more than three years on strike, long winters and hot summers on the picket line, but we feel vindicated in this decision.

“This is a win for the working class against a large multinational company, and it serves notice to all employers that they must respect workers’ bargaining rights,” said Nedila.

Next the CIRB will impose a collective agreement between IBEW 213 and Ledcor Technical Solutions, but the fight is far from over.

“While this decision is precedent setting, our fight now goes to Ottawa where the Federal NDP just introduced anti-scab legislation,” said IBEW 213 Lead Organizer Dustin Brecht. “Worker protections must be added to the Canada Labour Code so that this doesn’t happen again.

The following is the CIRB decision summary, remedy and conclusion. You can read the full decision in the attached PDF

[319] Under section 50(a)(ii) of the Code, the parties are obliged to make every reasonable effort to enter into a CA. As mentioned, that means that irrespective of whether a strike has been declared, the fact that the employer does not like union conduct during the strike, including media communications or conduct directed at specific individuals, the fact that the union sought intervention under section 80 and the fact that certain employees wish to decertify the union, the employer is obliged to meet with the union and bargain the terms of a CA.

(a) creating an impasse by insisting on unusual CA terms that were not industry standards for technicians, particularly the wage rates, which gave the employer the unilateral right to reduce or change the wage rates;

(b) refusing to meet with the union to bargain the terms of the CA for many months after it tendered its September 2019 offer; and

(c) focusing on attempts to have the union concede the reasonableness of employer bargaining objectives, rather than exchanging bargaining proposals that might have allowed the parties to reach an agreement on the terms of a CA.

[321] Further, the Board notes that in the ULP decision, it found that LTS had breached its duty to bargain in good faith by refusing to recognize drops and MXU technicians as members of the bargaining unit. The Board found that LTS’s communications had driven a wedge between the MXU employees and other members of the bargaining unit. The Board reiterates that a revocation application was brought by Mr. Howell, a former MXU technician.

[322] Overall, the Board finds that despite its dismissal of the majority of the ULP allegations made by the union, the employer’s actions resulted in the denial of the representational rights granted in the certification and constituted a refusal to recognize the union. The employer’s actions have neutralized the union’s ability to participate in a meaningful way in collective bargaining.

[323] The Board is not satisfied that the employer engaged in negotiations for the purpose of ridding itself of the union. However, the employer’s actions would result in an average employee thinking that the union was of little or no assistance in negotiating the terms and conditions of employment. This could result in a revocation application. In fact, a revocation application was filed.

[324] The Board finds that these are exceptional circumstances and, for these reasons, has decided to settle the terms and conditions of the first CA under section 80 of the Code. In making this order, the Board is not re-balancing bargaining power or interfering in free collective bargaining but is making a required correction because the employer did not bargain in good faith and make every reasonable effort to enter into a CA. The Board is intervening because, in this case, there was a failure of the collective bargaining process as a result of the employer’s conduct.

[328] The Board has considered the possibility of simply remitting the matter back to the parties, with a direction that the employer make a new offer on wages and other matters in dispute, like the Board did in Intek. The Board has determined that this is unlikely to bear fruit. It notes, in particular, that it views LTS’s conduct as an outright refusal to bargain.

[329] The Board directs the parties to meet with Ms. Foley, the IRO, to permit her to update her report of June 9, 2020, about what issues are agreed to and which remain in dispute. Ms. Foley will also assist the parties in developing a back-to-work protocol. The parties will have seven days following the receipt of the report to provide comments on her report.

[330] If the parties express an interest in attempting to resolve the remaining disputes, Ms. Foley may assist them, in her capacity as a mediator, with such discussions taking place on a without-prejudice basis.

[331] Once Ms. Foley reports to the Board and the parties have had an opportunity to comment on her report, the Board will schedule a case management conference to discuss the next steps to fix the terms of the CA that remain outstanding. The parties appear to agree that a further hearing is necessary. However, the Board reminds the parties that it may decide any matter without holding an oral hearing (see section 16.1 of the Code).

[332] Before leaving this matter, the Board wishes to encourage the parties to make one last effort to bargain the terms of the CA.

[333] The Board also intends to issue a back-to-work protocol after the parties have had an opportunity to provide input to the IRO or agree on such a protocol. The Board hopes that during the term of the CA, the parties will develop a more productive and trusting working relationship.

[334] This is a unanimous decision of the Board.

Recent News
Bentall Memorial 2023
Join us on Friday, January 6, 2023 for the annual memorial honoring the Bentall Tower IV w
view
A Look Back at 2022, and Forward to the New Year
We starting 2022 still drying out from devastating floods in the Fraser Valley and IBEW 213 welc
view
Season's Greetings from IVP Russ Shewchuk
On behalf of the First District Office and our entire staff across the country, I would like to
view
Notice of Dues Increases January 1, 2023
At the 40th IBEW International Convention held this past spring in Chicago Illinois, delegates a
view
IBEW President Lonnie R. Stephenson Retires, International Secretary- Treasurer Kenneth W. Cooper Named New President
International Brotherhood of Electrical Workers President Lonnie R.
view